Copyright Notice The content of this page is provided by Vincent Julius Thiele. All rights reserved.

The bachelor thesis at hand primarily focuses on analyzing and comparing different means, by which a robot assistant can identify its users. The goal of this ability to differentiate would be to allow for a personalized interaction between human and machine, so that a person’s particular needs are recognized and can be handled appropriately. For that, the thesis is predominantly aimed at researchers and developers, working in the ﬁeld of human-robot interaction, with particular attention to the employment of robots in medical care. During the course of this thesis, the identiﬁcation based on the properties of the human voice was chosen as the most promising method, warranted by its ease of use in everyday life. Lastly, this method was implemented in the form of a prototypical app for Android devices and in particular the Loomo assistant robot. The prototype’s performance was examined in four evaluation sessions with a total of eleven different, both present and absent speakers. Here it was proven, that even in this early stadium, the application’s accuracy was sufﬁciently precise, whereas it provides several options to optimize the process and by that to increase its effectiveness. By demonstrating the means to realize the identiﬁcation of users and augmenting the human-robot interaction, an advance in terms of spread and usage of robots in the ﬁeld of medical care is the center of attention, whose importance became all the more apparent when exploring the given topic.

You can download the full submission as PDF file (3 MB) here. 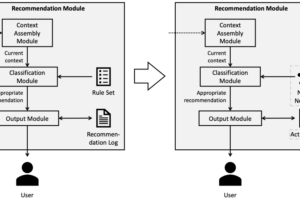